A Brief History of the Village of Islington

Today, Village of Islington Business Improvement Area (BIA)  is located on Dundas W. between Montgomery Road and Kipling Avenue. Read below to learn more about the rich history and culture of our community.

George and Mary Johnston were the first permanent settlers in Islington after their journey from Pennsylvania to Upper Canada in 1798.

Initially, they lived with their nine children in a log cabin they built on a 100-acre Clergy Reserve lot, which straddled Dundas between Kipling Avenue and approximately where Mabelle Avenue is today.

The Johnstons purchased an another 100-acre lot on the west side of Kipling Avenue, between Bloor Street and Burnhamthorpe Road, and moved into a new stucco-over-frame house they built at the north end of the property.

Eventually six generations of Johnstons lived on and farmed the Kipling property, with the last piece of their land sold out of the family in 1985.

Amasa and Desdemona Wilcox, arrived from New York State with their family in 1815,  leasing the Clergy Reserve lot immediately north of the Johnstons, which straddled Dundas between Mabelle and Islington Avenues inn1816.

Amasa built a saw mill on Mimico Creek, in what is now Islington Golf Course, operating it with his second son, Friend.

Amasa moved to Oxford County in 1839, but retained ownership of land in Islington until his death 1870 and generously donated adjacent lots on Dundas, west of Burnhamthorpe, for the village’s first three key institutions: a school in 1832, a Methodist church in 1834, and a non-sectarian cemetery ca. 1844.

The village grew in waves that were closely related to the development of convenient transportation.

Islington Village quickly became the hub of a road network that consisted of Dundas Street, Islington Avenue (put through from Dundas Street north to Albion Road in 1844,) the Etobicoke and Mono Sixth Line Plank Road.

Toll road incorporated in ran from Dundas Street, along today’s Burnhamthorpe Crescent and Burnhamthorpe Road, built by Thomas Montgomery as a shortcut for his customer on their way to and from grist mills on the Humber River at Bloor.

In 1877, the Credit Valley Railway opened, this rail service meant that commuters could now take a 25 minute ride to or from Toronto by train, and mail now arrived and left by train.

Canning (now Cordova) Avenue was opened to provide a connection between Dundas and Bloor, also providing access to the new Islington railway station built that year

The Credit Valley Railway was bought by the Canadian Pacific Railway which still operates today on the same route through the Islington area.

The site for St. George’s On-the-Hill Anglican Church was donated by William Gamble, a local miller, high on the ancient Lake Iroquois shoreline. The original stucco church with its tall spire was designed by Weston architect, William Tyrrell, and when it opened in 1847, it was dedicated by the legendary Right Reverend John Strachan, Bishop of Toronto.

The original stucco exterior walls were covered with brick, a basement, the buttresses and a porch were added.

Kingsway College School has occupied the church’s education wing, as well as an addition the school built to the north in 2011.

Congregation’s second church of brick opened on the south side of Dundas, east of Cordova. After the congregation moved in, they sold the 1844 church to Etobicoke Township for $700 for use as the Township Hall and the first public library.

Congregation moved into their current church at 25 Burnhamthorpe Road, built of stone in a modern Gothic style.

The building was enlarged and the current neoclassical facade was added to the front.

After Etobicoke’s council moved to the new Civic Centre on The West Mall in the building became the headquarters for the Etobicoke Division of the Metropolitan Toronto Police.

Stone inserts reading “Etobicoke Municipal Offices” and “Police” still exist on the front and east side of the building. It has been home to the Fox & Fiddle Restaurant at 4946 Dundas since 2000.

Thomas Musson had been appointed Islington’s first postmaster and the post office was in Musson’s general store, located where the Second Cup is today.

Built by Alexander MacPherson as an income property, this property was site of Islington post office and telephone exchange.

Musson was in financial difficulty and lost his combined store/residence.

When Musson passed, his wife Elizabeth succeeded him as postmaster until, 1906. The post office moved back into the general store under its new owner and postmaster, John Dunn.

MacPherson passed and the house at 4884 was sold to Islington market gardener, Robert H. Tier Sr., who rented it to his son, Thomas.

The property was sold to William and Olive Newlove.
Today most of the brick has been painted white, and a large, surrounding verandah was torn down years ago, but you can still see the red and yellow brick at the rear of the house and the original decorative front door.

A one-room school was built on land donated by Amasa Wilcox where the Islington Seniors’ Centre at 4968 Dundas Street West is now located.

The school became part of the Home District School Council and was called School Section No. 8.

Overcrowded, the school’s trustees replaced it with a larger red brick one-room building on the west side of Cordova Avenue, south of Dundas.

The 1832 school building was moved closer to Dundas Street, rotated 90 degrees, and converted into a residence by local carpenter, Thomas Ide. Later, a small storefront was added where Lloyd Watts operated Islington Hardware and Electric.

A new six-room school with auditorium, stage, and indoor plumbing was opened on the same Cordova Avenue site.

The Volunteer Brigade was “officially” recognized

The Islington Volunteer Fire Brigade was disbanded and the Township of Etobicoke Fire Department, with full time fire fighters, took over responsibility for the entire Township.

The large doors that once opened into the fire truck bays and the brick quoins on the buildings’ corners are still evident on both 4990 and 4992 Dundas today, where Alfa Job Agency and Traditional Korean Bakery are located today.
Islington’s first school classes were taught in an existing small building on a corner of Benjamin Johnston’s property on Burnhamthorpe Road.

The school celebrated its 150 anniversary!

Enlarged again, it now houses both Islington Junior Middle School and Islington Community School. George and Mary Johnston’s eldest son, Thomas, was one of the first three trustees of the 1832 school, and four generations of Johnstons went on to hold that position over the next 120 years.

Perhaps the most dramatic changes in Islington happened after World War II. The post-war suburban boom, with an accompanying large investment in roads and automobiles, filled in any remaining farmland north and south of Dundas with streets and houses. 1950 – 1960  Apartment buildings arrived in the 1950s and 1960s. 1960 The bridge was built on Islington Avenue over Mimico Creek and Islington was finally open between Dundas and Bloor Streets. 1968  The subway’s arrival at Islington Avenue brought unprecedented access to downtown Toronto, resulting in even more development. 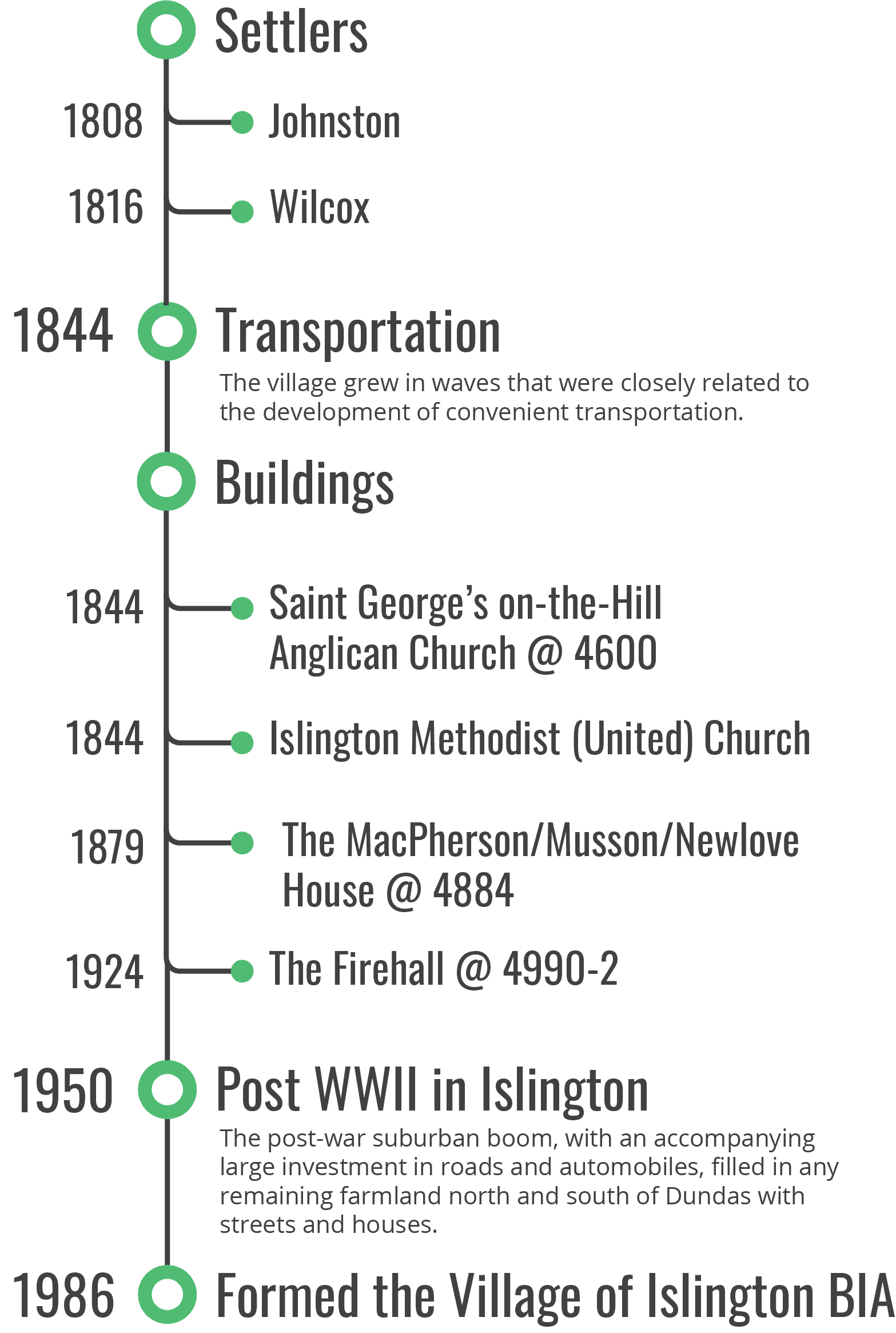